It has been a long time since we updated the blog, in fact, this is the first post of July a day before August starts. We’ll try not to leave it as long next time, but as you could expect, jumping on here to update can sometimes be quite hard.

July, again, was a busy month. Aimi was able to make a couple of visits home for the afternoon. Although it was for only a short time, it was good for her to sample home life away from doctors and nurses all day. We all obviously more than appreciate all the docs and nurses hard work, but from Aimi’s point of view, it must have been nice for her to get away for a while.

Aimi also still had some sniffles and congestion a week or two ago and was put on a little bit of air on the ventilator, mainly just to keep her clear. It was only for a few nights and only the little ‘nasel prongs’ air. It may have been another cold-type virus or from where the Paraflu was hanging on from before.

Aimi has also had more surgery this month. The doctors thought it was time to take the feeding tube from Aimi’s nose and move it to her belly. She originally had the NG-Tube (Nasogastric Tube) which entered her nostril and fed down her throat into her stomach. With this tube, before every feed, a syringe had to be placed at the end and drawn back. This was to test the tube was still situated in the right place. Now, she has a G-Tube (Gastrostomy tube) fitted into her belly (not too far under her Dialysis line on the same side).

This was a surgical procedure to get this fitted and are seen as a safer replacement to the NGTube. Aimi went in for surgery and put under anaesthetic. The doctors were going to fit it by a new method, but due to Aimi’s location of her Liver, they could not do it this way and had to re-schedule the surgery. Where Aimi’s Kidneys were so large, they crushed the area and pushed up against the other organs which moved her Liver along, and this made it hard for the surgeons to use that method of G-Tube placement. 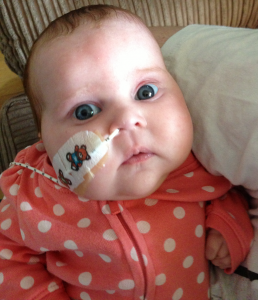 Aimi went back in for it a week or two later, where they thought it would have to be fitted by the conventional open surgery method. They did manage to avoid this by using a totally different method to the other two, and she safely now has an operational G-Tube fitted and working. The syringe -draw before every feed no longer has to be done as the G-Tube stays in place. This also (other than being a bit sore and having another lead out of her body) must feel better to her than the NG-Tube. The tube in her nose was starting to annoy her as she worked out how to pull it out and was always putting her hands to it. It also can’t feel too nice when the nurse has to re-insert it again (quite a few times now) while Aimi is wide awake. So Aimi now has all that out of her nose and those teddy plasters off of her face and has gained a full use of the other nostril (which must also help during cold virus with breathing). 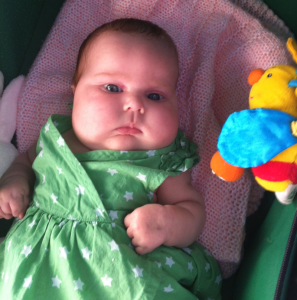 Aimi has also been through a series of eye and ear tests. Her optic nerves on her eyes had shown up paler than they should be at her age and so then went through a more stringent eye test a few weeks later. Thankfully, she has responded well and the doctors think it is just where Aimi is much slower developing than babies that have kidneys and have not been in hospitals since birth. Aimi is due an MRI in August to see that her brain is doing what it should and is just procedure, to follow a clear ultrasound of her head a few months ago. We hope everything goes well and is fine with that.

The team at GOSH have now given Aimi clearance for discharge to come home! Great news eh? Obviously it will still be quite hard as Aimi will need to go to GOSH at a minimum of 3 times a week for Hemodialysis, but at least Aimi can have some peace at home in between and enjoy things in a home environment. She has come such a long way and 4 months feels like a few years. Followers on Aimi’s Twitter page would of seen the photo of the small quantity of medical supplies delivered at home last week. 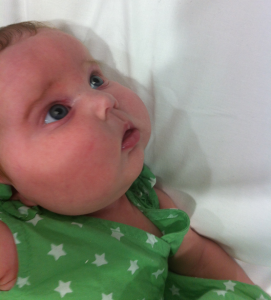 We will try to keep the blog updated more often as know some people do come back to have a read often!

Don’t forget, you can subscribe to blog posts by adding your email address on the right hand side of the main blog page. Every time a post is added, you will receive notification in your emails. You also get this automatically if you register here at the site by visiting the register page. You can then leave comments on posts if you are registered and logged in. If you want to leave a comment and don’t want to register the normal way here, you can use your Facebook or Twitter accounts and login with those on the login page.