Aimi didn’t get kidney removal on Wednesday due to the infection mentioned in the last post. During the early part of the week, her blood work was very bad and we wasn’t sure if it was the kidney’s getting worse or part of the infection. On Tuesday, her creatinine level was around 250, which signifies very bad kidney function (it was 180 a day or two previous) and also her Urea level was very high, so the consultant thought it best to get her onto dialysis shortly.

On Wednesday, they fitted a haemodialysis port to Aimi’s chest, although her creatinine had actually dropped significantly just prior to that. They were also concerned of the amount of fluid retention she had. 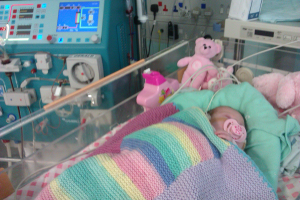 Her operation to get the port in went well and Aimi had an hour or so on the machine soon after. She has been getting an hour a day on it since then. For half that time, her blood is taken out through a tube in her port via the dialysis, which cleanses the blood before returning back to her body. She doesn’t have much blood being small, so they use some donor’s blood for transfusion (so those that donate blood – here is an example of where it can go). Here is a picture of Aimi on Haemodialysis machine.

The other half of the time, the dialysis removes fluid from her body. They took off 200ml one day and 125ml the next, though she had actually gained around 125ml in between dialysis days. Over time, hopefully the dialysis can take all this excess fluid out and the kidney removal will also help that. She looks puffy with all the fluid retention.

They will evaluate on Monday regarding Kidney removal and hope to re-book and get her in surgery next week. The kidneys are pushing down on blood vessels so one needs to come out to create some room.

It hasn’t been a good week but at least things are getting done to keep up with the speed of the disease. It was since around last Sunday, it seemed she took a bad turn and got quite ill from it all.

One Response to "Aimi on Dialysis"