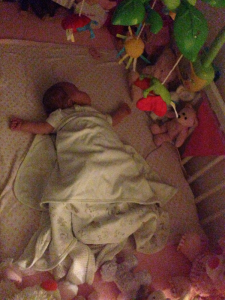 It’s been a while since we had a blog post and has been something we’ve been meaning to do for a while now.

The last post written was back on July 31st and on August the 1st, Aimi came home and went from being an inpatient to an outpatient at Great Ormond Street. As you could imagine, things have been pretty busy and will try to keep the blog going more often.

It was amazing to actually put her in her cot at home to sleep and wake up to her big eyes looking at you in the morning. She loves her bed and happily goes off to sleep on her own listening to her mobiles, unless she has something to moan about.

Since being home, she smiles so much and now grasps objects. Her eyes focus and follow a lot more too. Development wise, although she is behind on milestones, it has come on a lot over the weeks. Although still small, she has been gaining weight and size well. 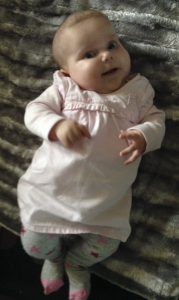 Aimi feeds 100% via her gastric tube and has a drip feed overnight. She also has 3 or 4 feeds through this pump during the day. Whether coincidence or not, since the tummy tube was put in, she is not keen on taking any milk orally and gags very easily. We will at some point try oral feeding again as she will hopefully start to accept solid foods at sometime. Her milk is made from a mixture of normal baby SMA and special additives because she has a fraction of what other babies guzzle down daily, so needs extra nutritional support to gain weight at a good speed.

Aimi is also given quite a few medicines a day and night. These are mainly for things she is lacking such as calcium. She is also given thyroxine to keep her thyroid level stable where it is low, mentioned earlier in the blog. These are also given via her G-Tube.

When Aimi first came home, she was sick every night or early morning. Luckily, although she can vomit quite regularly, she can go through times where she isn’t sick every day. Obviously, babies can be sick easily bringing back up milk, but with Aimi, it is quite different as she really wretches and can be in some discomfort. It seems to be her ‘normal’ and doesn’t faze her too much, she normally raises a smile afterwards. 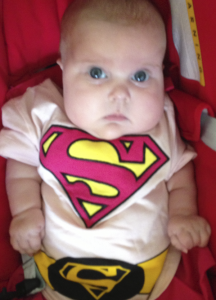 During the summer, when the last blog was written, it was mentioned that Aimi was due an MRI of her brain during August. On that MRI, it was shown that she has increased white matter on the optical part of the brain. They think that this was due to the period of time when Aimi was born and was initially starved of oxygen while they put her on the ventilator at the local hospital. Aimi has had a series of eye tests and has responded well so it looks like, for now, that its not too much concern. She seems to focus fine and follow objects and will continue to have appointments with Ophthalmology department at GOSH to keep an eye on things. These appointments are usually every few months.

Obviously, Aimi continues to have her dialysis sessions three times a week. She has had a few surgeries since the last post. These have been for dialysis lines. Her first line became quite hard to do dialysis with and this was changed to a larger double line. They removed the old one and placed the new double line in a new vessel on the other side of her body. Just recently, they noticed that a cuff that is meant to be inside her skin had come out on the line. This meant that last week, Aimi had to go back in for another surgery for another line. Again, that one was removed and placed in a vessel over the other side of her body (not far from where the first one was). Although, dialysis line insertion is routine, its isn’t easy after. They look like gunshot wounds when first done as they ooze some blood and Aimi always has a sore throat and a lost voice for a day or so, where the ventilator is inserted during surgery. 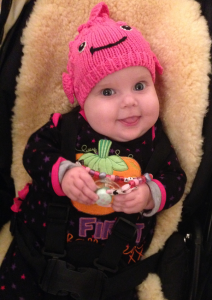 Since the summer, Aimi has also had an MRI of her abdomen under anaesthetic. This was to check vessels for a new kidney going in there. Remember, babies need to be 10kg to accept a kidney and ‘kidney babies’ don’t really have much appetite and so it takes longer to get to that weight. Aimi is just over 6kg so GOSH expect it to be possibly later next year, before she reaches the transplant weight. They have said that anyone willing to be tested to see if they are a match, can be done so now.

Aimi also has an appointment at Kings College Hospital in February to check her Liver. Kings are Liver specialists (apparently the best in the country) and as ARPKD can also affect the Liver, it was best to keep on top of it. Aimi has some slight Liver enlargement but apparently looks okay on the scan at GOSH, so we hope Kings can tell us the same and will continue to work as it should.

Aimi’s JustGiving page in aid of Great Ormond Street is still up, so if you can spare a few pounds, please keep donations coming in. We want to offer thanks to Waters and Stanton PLC who ran a raffle in aid of GOSH at their open day during the summer. They raised just short of £620 which was added to the total, along with all your generous donations, and issued to GOSH a few months back.

We also want to give thanks to Hannah, who has a fund-raising page for GOSH on behalf of all their work for Aimi and other Children. Hannah will be jumping out of a plane next May for this cause (hopefully with a parachute attached). She has so far raised £205 of a £300 target so go to Hannah’s JustGiving page and have a read. It’s coming up to Christmas and money is tight, but if you can spare just a few pounds to either JustGiving pages, it would be great! 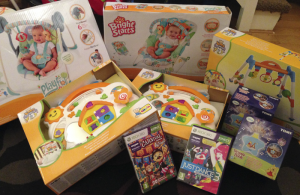 Since Aimi has been home, she has had some visitors that really wanted to come and see her. These visitors have been so supportive. One of which is Garry. Garry had thrown a lot of money at GOSH since the JustGiving page was up and raised awareness over the web of Aimi’s condition, so for him to finally meet Aimi was amazing. He arrived with yet more money towards the fund, and was used to purchase things that GOSH needed.

We’ll try to keep more on top of the blog as the website has been visited often. A few pregnant parents have been in touch, that have had the same symptoms during pregnancy and have found the website. We’ll maybe even do some general ARPKD posts that may be of help to others finding us, facing the same situation.